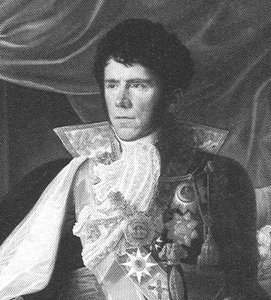 Belgian general who commanded Dutch troops throughout the time

An architect from Belgium before he became a soldier, Jean-Baptiste Dumonceau volunteered to become a dragoon in the service of the Belgian states in 1787. In 1789 he was promoted to sous-lieutenant and lieutenant and he took part in the Brabant Revolution that overthrew Austrian control of Belgium. The next year Dumonceau became a capitaine in the company of Canaris, known for their yellow uniforms, and in November of 1790 he was promoted to lieutenant colonel.

In June of 1792 Dumonceau joined the French army as a lieutenant colonel and he was placed with the Legion Belgique in the Army of the North. In February of 1793 he was promoted to chef de brigade and only a few months later he fought at the combat of Tourcoing. That October Dumonceau was promoted to général de brigade by the representatives of the people with the Army of the North and then in November he served at Lille. In 1794 he served in Souham's and Bonnaud's divisions and then in 1795 he was briefly called to Paris by the Committee of Public Safety. Next Dumonceau was sent to serve as a lieutenant general in the service of Holland. During the years 1797 through 1799, Dumonceau commanded the Dutch army of the Batavian Republic. In August of 1799 he defended Frisia, then in September he served under Brune at Zyp and then fought at Bergen where he was wounded. Dumonceau finished the campaign by serving at the Battle of Alkmaër in October. Afterwards he served under General Augereau in the combined French-Dutch army.

During the years of peace that followed, Dumonceau continued to serve in Holland. In 1803 he was named commander-in-chief of the Dutch Army but then also placed under Mortier in the Army of Hanover. The next year Dumonceau took command of the 3rd Dutch Division at the camp of Utrecht under General Marmont. When campaigning began in 1805, his division formed part of Marmont's II Corps and Dumonceau distinguished himself at the crossing of the Danube and the action of Ingolstadt. That November and December he served under Marshal Mortier and then in 1806 he returned to Holland.

After Prussia declared war in 1806, Dumonceau led a Dutch division to join with Marshal Mortier's VIII Corps. In the meantime he was recognized as a Councilor of State in Holland and awarded the Cross of the Order of Merit of Holland. In March of 1807 his division served under Marshal Brune, and then later in 1807 Dumonceau was appointed a maréchal of Holland. He was also awarded the Grand Cross of the Order of Fidelity of Baden. Next Dumonceau served as Holland's ambassador to Paris, and then in 1809 he commanded the troops at Amsterdam that served against the British Walcheren expedition.

After Napoleon absorbed the Kingdom of Holland into France due to his displeasure at his brother Louis' administration, Dumonceau returned to French service as a général de division. Nevertheless, he continued to command Dutch troops and in 1811 he was named the Count of Bergendael. Dumonceau commanded the 2nd military division at Châlons-sur-Marne in 1812 and that year he was also awarded the Grand Cross of the Order of the Reunion.

With the extensive losses suffered during the campaign in Russia in 1812, Dumonceau and his Dutch troops were called to serve in the campaigns in Germany in 1813. He led a Dutch division to become the 2nd Division of General Vandamme's I Corps. During the spring of 1813 Dumonceau took Brême and served at Harburg, and then in the summer he served at Kulm where Vandamme was captured. Two weeks later Dumonceau was defeated at Hollendorf and he was forced to withdraw to Dresden. When Dresden surrendered in November, Dumonceau was taken as a prisoner of war.

After Napoleon's abdication in April of 1814, Dumonceau was released that May and the new Bourbon government restored his command of the 2nd military division. They also named him a Knight of Saint Louis and a Grand Officer of the Legion of Honor. Dumonceau was recalled to Paris and stripped of his command just before Napoleon retook power in 1815 for the Hundred Days, and after Napoleon resumed power he restored Dumonceau to command the 2nd military division yet again. After Napoleon's second abdication, Dumonceau was forcibly retired from the French military and returned to the service of Holland where he took part in the States General of the Netherlands.