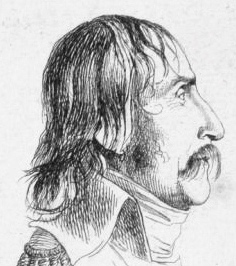 Grenadier and veteran of multiple campaigns

Beginning his military career in 1775, Pierre Louis Dupas enlisted in the Piedmont dragoons in the service of the King of Sardinia. Seven years later in 1784 he passed in to the service of the Republic of Geneva and then in 1787 he passed into the service of France and he joined the garrison at Corsica. In 1788 Dupas returned to France and the next year he took part in the storming of the Bastille on July 14th, 1789. He served with the National Guard of Paris for the next two years and then he served as lieutenant colonel in the Vainqueurs of the Bastille. In August of 1792 Dupas joined the Legion of Allobroges. Dupas was next employed in the Army of the Alps and he received a promotion to capitaine in December. In 1793 he was promoted to chef de bataillon and he became an aide-de-camp to Carteaux at the Siege of Toulon . In 1794 Dupas served with the Army of the Eastern Pyrenees and then in 1795 he served with the Army of the Western Pyrenees and he served at Cerdagne.

Dupas was next sent to the Army of Italy at the end of 1795. In 1796 the new commander General Bonaparte arrived and Bonaparte took the Army of Italy on the offensive. In May Dupas took command of the 2nd Battalion of Carabiniers of the advance guard under Dallemagne and he served at the crossing of the Po and then at the Battle of Lodi . The next month he commanded the 5th Battalion of Grenadiers on the expedition to Livorno, and afterwards he went on to serve at the Siege of Mantua where he repulsed an Austrian sortie. Next Dupas joined the 27th Light and in November he fought at Caldiero where he was wounded by four shots to the left hand and one to the right arm. On January 14th Dupas missed the Battle of Rivoli as he was sent in pursuit of Provera's forces and during this pursuit he was wounded by a ball to the right thigh at Anghiari.

In 1798 Dupas took part in the expedition to Egypt as part of the Army of the Orient where he was placed with the Guides on Foot of Bonaparte. He served in the action at Malta that June and then in January of 1799 he was promoted by General Bonaparte to chef de brigade of the 69th of the Line. In 1800 Dupas took command of the citadel of Cairo which he defended for 34 days. Once the French surrendered in Egypt in 1801, Dupas was returned to France by the British navy.

In 1803 Dupas was named colonel of the Mamelukes and then he was promoted to général de brigade. In 1804 he was named a Commander of the Legion of Honor and then in 1805 he joined the grenadiers of the reserve in General Oudinot's division. When the Grande Armée marched off to war at the end of August Dupas took command of the 2nd Brigade of Oudinot's division in Marshal Lannes' V Corps. During the campaign he served at Hollabrunn and then he distinguished himself at the Battle of Austerlitz by getting 5000 Austrians to surrender. Dupas was rewarded on Christmas Eve with a promotion to général de division and the Grand Cordon of the Order of the Golden Lion of Bavaria.

Dupas was sent in September of 1806 to Mainz to form a new division. He took command of the 1st Division of VIII Corps of the Grande Armée and led them into Prussia and Poland, and in March and April of 1807 he served at the Siege of Stralsund. A few months later Dupas fought at the Battle of Friedland. Next he was placed under Marshal Bernadotte at Hamburg and in 1808 he served in Denmark before taking command of a French division of the corps of troops of the government of the Hanseatic Cities.

At the start of 1809 Dupas was named a Count of the Empire. In April of 1809 when Austria attacked Bavaria, Dupas' division joined General Vandamme's VIII Corps. Dupas served at Ratisbon in April and then at Passau in May. At the Battle of Wagram in June, he served under Marshal Bernadotte and after the battle he took command of the 2nd Division of II Corps. Dupas next returned to France and he was put on leave to recover his poor health due to sickness and wounds. In 1811 he married the niece of General Hulin, another soldier who had stormed the Bastille in 1789. Dupas briefly returned to command in June of 1813 to command a division in Marshal Augereau's Corps of Observation of Mainz, but only a few months later he returned to France due to poor health and officially retired.