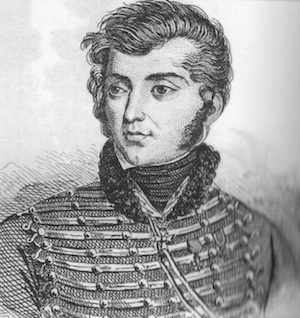 The son of a musician, Louis François Lejeune served much of his career as an aide-de-camp to Marshal Berthier but he is better known for his paintings of battles and his memoirs. His first military service came in August of 1792 when Lejeune became a soldier in the Company of Arts of Paris, and the next month he left for Châlons with the Arsenal battalion. A commission as a sous-lieutenant came quickly, and Lejeune went on to serve in the Army of the North and the Army of the Center. In 1793 Lejeune transferred to the artillery and he was promoted to lieutenant in the staff of the Army of the North. The next year he joined the Army of the Sambre and Meuse and served at the Siege of Quesnoy where he was wounded by a piece of wood hitting him in the chest after an explosion. Lejeune went on to become an aide-de-camp to General Jacob and then he served at the crossing of the Ourthe where he was shot in the thigh.

Lejeune transferred to the engineers in 1795 and during that year he worked on the camp of Grimlinghausen near Dusseldorf. The next year he supervised the building of three bridges over the Rednitz River when the army was retreating, and he later fortified Juliers. In 1798 Lejeune was appointed to the committee of fortifications and then in 1800 he was promoted to capitaine and made an aide-de-camp to General Berthier, serving in the Army of the Reserve. During the years of peace that followed, he was assigned to the staff of the 1st military division.

When the Grande Armée marched east in 1805, Lejeune was left at Boulogne and ordered to bring 300,000 pairs of shoes to the army as soon as possible. He made the delivery near Ulm and then continued his duties as an aide-de-camp of Marshal Berthier.1 After the conclusion of the campaign he received a promotion to chef de bataillon. In 1806 while he was traveling in Germany he met the Senefelder brothers who invented lithography, and he subsequently brought the technique back to France. Lejeune continued to serve on Berthier's staff for the campaigns in Prussia and Poland of 1806 and 1807, and in 1807 he served at the Siege of Danzig .

In 1808 Lejeune was sent to Spain where he distinguished himself at the Siege of Saragossa, but not without cost. He was wounded twice during the siege, once during the assault on the convent of Saint-Augustin and once during the assault on the convent of Santa-Engracia. Following his service at Saragossa, Lejeune was promoted to colonel and he rejoined Berthier in the Army of Germany for the Danube campaign of 1809. After taking part in the Battle of Aspern-Essling , Lejeune was sent to the Tyrol to fight against Andreas Hofer, but he returned to Berthier's staff in time to take part in the Battle of Wagram . Later that year he was created a Knight of Saint Leopold of Hungary and the following year he became a Baron of the Empire.

In 1811 Colonel Lejeune was sent on a mission to Spain, but that April he and his escort were attacked by a large force of guerrillas near Toledo. Lejeune's dragoon escort fought to the death but was defeated, his horse received thirty blows and was killed, and he was wounded and knocked to the ground, expecting to die too. The guerrillas stood over the wounded Lejeune and took aim at his chest but each time they pulled the trigger, their muskets misfired. Despite his wounds, Lejeune didn't quit fighting, he seized the moment and grabbed the barrel of one of their muskets and tried to fight off his enemies. Finally the guerrilla leader arrived and upon realizing the Lejeune was a colonel he ordered his men to not kill Lejeune.2

Lejeune was taken prisoner and transported to where a few other French prisoners were held. As the band of guerrillas decided to move, they learned of the hanging of two fellow guerrillas on the order of a French general. Wanting revenge, they prepared to hang Lejeune and his fellow prisoners, but were distracted by the sounds of gunfire in the distance. As the guerrillas went to investigate, they attacked and came upon a French courier and his escort, and slaughtered them all. With their bloodlust satisfied, Lejeune and his fellow prisoners were spared.3 Given Lejeune's high rank, he was sent to Cadiz before being sent to Portugal and finally England. After residing in England for a short time, Lejeune and a comrade escaped custody and made their way back to France that July.

Lejeune resumed his duties as aide-de-camp to Marshal Berthier for the campaign against Russia of 1812. After serving at the Battle of Borodino, Lejeune was named the chief of staff of Marshal Davout's I Corps after the death of the previous chief of staff, General Romeuf. A few weeks later, Lejeune received a promotion to général de brigade. During the retreat from Russia that followed, his face was badly frostbitten and in December he left the army without authorization and returned to France to recover.

Due to Lejeune's lack of authorization to return to France, in February of 1813 he was arrested and imprisoned in l'Abbaye. However, within a few weeks he was released, and then in May he was named chief of staff of Oudinot's XII Corps. While fighting at Wurschen that May, he was wounded by a fall from a horse. At the end of August, Lejeune took command of the 3rd Brigade of Durutte's division in VII Corps and in September he fought at Dennewitz. In the meantime he was named a Commander of the Military Order of Maximilian Joseph of Bavaria. Lejeune was still commanding a brigade at the end of October when he fought at Hanau where a piece of an exploding shell hit him in the forehead, badly wounding him and bringing an end to his participation in the campaigns.

Lejeune retired and received a pension, and after Napoleon's abdication he was named a Knight of Saint Louis by the restored Bourbons. He devoted much of the rest of his life to art, painting numerous portraits and scenes of battles with an eye for detail. In 1821 Lejeune married Marie Louise Adèle Amable Clary, a niece of the Clary sisters, and he therefore became a nephew by marriage to both Marshal Bernadotte and Joseph Bonaparte. For his career Lejeune returned to some staff positions with the army and then in 1837 he became the Director of the School of Fine Arts of Toulouse. In 1841 he became mayor of Toulouse.