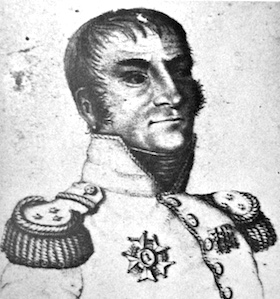 After studying in a military school, Pierre Louis Binet de Marcognet served as a cadet in the infantry regiment of Bourbonnais in 1781. As part of the regiment, he was sent to North America to take part in the American Revolutionary War under General Rochambeau. During that war Marcognet was commissioned as a sous-lieutenant. In 1787 he was promoted to lieutenant and then in March of 1792 he was promoted to capitaine in the 13th Infantry. Marcognet served with the Army of the Rhine and in September of 1793 he fought at the action of the camp of Bodenthal where he was wounded by a shot to the right thigh. Two months later he fought at Fillingen where he was again wounded, this time by two shots to right forearm. In December Marcognet was suspended from the military but nevertheless he remained with the army for a short period longer. That Christmas he fought at the action to retake the lines of Wissembourg where he was wounded in the right shoulder by the blast of a shell.

Marcognet was reintegrated into the army in July of 1795 and he joined the Army of the West. In 1796 he was sent to the Army of the Rhine with the 10th Light and he fought at the combat of Ettlingen on July 9th, 1796. The following day Marcognet was promoted to chef de bataillon. Next he served at Neresheim in August, Geisenfeld in September, Biberach in October, and the defense of Kehl in November. At the defense of Kehl Marcognet was wounded by a shot to the right arm. In November of 1798 he joined the 95th of the Line and in May of 1799 he was promoted to chef de brigade. In 1800 Marcognet was given command of the 108th of the Line, he and his men served in Grandjean's division, and in December he fought at the Battle of Hohenlinden where he was wounded and taken prisoner. He was released and returned to France in February of 1801.

In August of 1803 Marcognet was promoted to général de brigade and sent to the camp of Montreuil. In 1805 when the Grande Armée marched out to confront the Third Coalition, Marcognet took command of the 1st Brigade of Mahler's Division in Marshal Ney's VI Corps. That October he distinguished himself at Gunzbourg. The next year Marcognet served on the campaign against Prussia and on October 20th he joined Vandamme's division. In December he joined Gardanne's division and then in March of 1807 he joined Marchand's division.

In 1808 Marcognet was sent to Spain and named a Baron of the Empire. Continuing to serve in Spain, in June of 1809 he served before Oviedo. In July of 1811 Marcognet was employed in the camp of Emden and he was also promoted to général de division. In February of 1812 he returned to France to take command of the 14th military division at Caen. As the war in Saxony was waged in 1813, Marcognet was sent to Italy where he took command of the 2nd Division and served under General Grenier. He won at San Marein in September, fought at Caldiero in November, won at San Michele a few days later, and then was defeated at Rovigo and at Boara in December. In February of 1814 Marcognet fought at the Battle of the Mincio.

After Napoleon's abdication and the Bourbon Restoration, Marcognet was named a Knight of Saint Louis and Grand Officer of the Legion of Honor but he was also put on non-activity. When Napoleon resumed power in 1815 for the Hundred Days, Marcognet supported him and received command of the 3rd Division of General Drouet d'Erlon's I Corps. Marcognet led this division on the campaign in Belgium that June and he fought at the Battle of Waterloo. Afterwards he retired from the army.