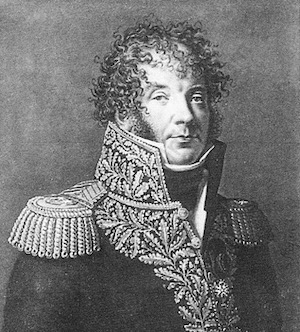 In April of 1800 Montrichard took command of the 2nd Division of Lecourbe's corps in the Army of the Rhine. That May he served at Stockach, Messkirch, and Memmingen and then in June he served at Hoechstaedt. Later in June Montrichard took command of the 2nd Division and he served at the combat of Neuburg. Once hostilities resumed in the winter, he crossed the Inn at Neufeuern in December and then battled the Austrians at Götzing, Salzbourg, and Kremsmunster. After peace had been obtained, in late 1801 Montrichard began serving in Switzerland. In 1802 he was sent to command the French troops in the Batavian Republic and then in 1803 he was sent to Breda, the camp of Nimègue, and Hanover. Montrichard's next major career movements were to pass to Italy as commander of the French and Italian troops in the Papal States and then command a division of the army employed in Naples. In December of 1805 he was suspended from his functions and put on non-activity for having levied a contribution of 100,000 piastres on the March of Ancona.

In January of 1808 Montrichard returned to duty by joining the Army of Dalmatia under General Marmont. He took command of the 1st Division and in May of 1809 he served at Göspich. After the army reunited with Napoleon's forces in Austria, Montrichard was given command of the isle of Lobau after the Battle of Wagram . That November he took command of the 2nd Division of the Army of Illyria at Zara where he remained until December of 1810 when he was recalled to France. Montrichard was once again put on non-activity until April of 1812 when he was ordered to organize a division in the Frioul. In 1813 he was sent back to Illyria to take command of the 2nd Division and in April he was named commander of Ragusa. Montrichard held Ragusa until the end of January of 1814 when he was forced to surrender the city. By the terms of the surrender he was taken prisoner and transported to Ancona. After the Bourbon Restoration, Montrichard was placed on non-activity but also named a Knight of Saint Louis. He did not take part in the Hundred Days in 1815 and he retired later that year.