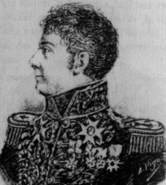 The son of a trader, François Beaudire Berge (sometimes spelled François Baudire Berge) entered the newly established École Polytechnique in November of 1794. Two years later he was commissioned as a sous-lieutenant and he entered the artillery school of Châlons. In May of 1797 Berge completed his schoolwork and he was promoted to lieutenant in the 1st Foot Artillery. Initially he was employed in the Army of England but as attention shifted to Egypt he joined Dommartin's staff in the Army of the Orient. Berge saw his share of action that year, serving at the action of Malta, at Alexandria, at Chebreiss, and then at the Battle of the Pyramids . In 1799 he took part in the campaign to Syria and he served at the Siege of Jaffa and the Siege of Acre. Back in Egypt, Berge fought at the Battle of Abukir and then in September he was promoted to capitaine. He next served at the Siege of Cairo and in May of 1800 he joined the 4th Foot Artillery. Around this time Berge also became an aide-de-camp to General Songis.

After returning from Egypt, in 1802 Berge was named a capitaine in the Artillery of the Consular Guard and he again became an aide-de-camp to Songis. That August he was sent to Tripoli with Sébastiani and then in 1803 he was promoted to chef de bataillon. Berge was next named deputy director of the artillery at Guadeloupe, but instead he remained with Songis in the Army of the Coasts of the Ocean. After war broke out in 1805, he served on campaign with the Grande Armée, serving at Ulm in October and at Austerlitz in December. In March of 1806 Berge was named a major of the 5th Horse Artillery but as the army prepared for the campaign against Prussia he joined the general artillery staff. During the campaigns of 1806 and 1807 he served at the Battle of Jena and then the Battle of Eylau.

Promoted to colonel in 1808, Berge was next sent to Spain as chief of staff of the artillery in Spain and he later took command of the 5th Horse Artillery. 1809 was a fighting year for Berge as in July he fought at Talavera where he was wounded by a shot to the right side, in August he fought at Almonacid, and in November he fought at Ocaña . In 1810 Berge served at the crossing of the Sierra Morena and he was named a Knight of the Empire. In 1811 he fought at the Battle of Albuera where he was wounded in the arm by a ball and later that year he served at the combat of Santa Marta de Villalba. Berge was named commander-in-chief of artillery of the Army of the South in Spain in April of 1813 and the following month he was promoted to général de brigade. In 1814 for the defense of France he served under Thouvenot at Bayonne.