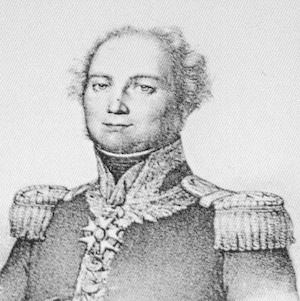 Général de brigade who was killed at Auerstadt

In March of 1799 De Billy was placed in Gouvion St. Cyr's division in the Army of the Danube, and then two months later he joined Legrand's division. He was wounded at a minor action in Zurich in June, and then the next month he was promoted to général de brigade. At the end of the year De Billy joined the Army of the Rhine, and then in April of 1800 he joined the reserve of the same army. That May he fought at Biberach where he was wounded in the left shoulder by a ball. Next he took command of the 1st Brigade of Decaen's division and he led them into action at Hohenlinden that December.

During the years of peace, De Billy was employed in the département of Deux-Nèthes before going to the camp of Bruges in 1803. The next year he was named a Commander of the Legion of Honor, and in 1805 he took command of the 1st Brigade of the 1st Division of III Corps. Named commander of Munich in October of that year, in November he joined Caffarelli's division and fought with them at Austerlitz.

In 1806, General De Billy joined Morand's division and led his men on the campaign against Prussia that October. At the Battle of Auerstadt, he was killed.