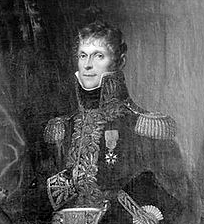 Général de division who was mortally wounded at Salamanca

Sharing the same name of his father who was a general in the French army, Claude François Ferey joined the army in 1788, serving with the chasseurs of Gévaudan and then the chasseurs of Normandy. He joined the cavalry of the constitutional guard of the king in December of 1791 and remained in that position until he was dismissed in June of 1792. A month later Ferey joined the 9th Battalion of Volunteers of Haute-Saône. In 1793 he served with the Army of the Rhine and he served at the defense of Mainze where he was wounded by a shot to the left knee. That July Ferey was promoted to capitaine and then after the surrender of Mainz he was sent to serve in the Vendée as an aide-de-camp to General Marigny. In September he was promoted to chef de bataillon and over the next few years he served with the Army of the West and the Army of the Coasts of the Ocean. In October of 1796 Ferey was promoted to chef de brigade of the 24th Light in the Army of the Sambre and Meuse. The following year he served at Neuwied in April and later he served at Wiesbaden. In the year 1800 Ferey joined the Army of the Reserve as part of Chambarlhac's division. That June he fought at Montebello and the Battle of Marengo and then in December he fought at Pozzolo.

During the peace that followed, Ferey served in the corps of observation of the Gironde. In 1803 he was promoted to général de brigade and sent to serve in the camp of Saint-Omer. In 1804 Ferey was named a Commander of the Legion of Honor. When in 1805 the Grande Armée marched east to face the Austrians in the Third Coalition, Ferey took command of the 2nd Brigade of Vandamme's 2nd Division in IV Corps. He fought at the Battle of Austerlitz that December. Next Ferey joined Leval's division in 1806 and then in February of 1807 he joined Carra Saint-Cyr's division. In June of 1807 he repulsed the Russians at Lomitten and then he fought at the Battle of Heilsberg where he was wounded.

In 1808 Ferey was sent to the Army of Spain where he joined the staff. In January of 1809 he was named Baron of Rosengath and he took command of the 2nd Brigade of Mermet's division. The next year Ferey joined Loison's division and then in the summer of 1810 he served at the sieges of Ciudad-Rodrigo and Almeida. Next he served at Aguada and then the Battle of Bussaco and then in October he was promoted to général de division. In March of 1811 Ferey took command of the 3rd Division of VI Corps when Loison took command of the corps after Marshal Ney's departure. That month Ferey served at the combat of Foz d'Arunce and then two months later he fought at the Battle of Fuentes de Oñoro . In July of 1812 Ferey fought at the Battle of Salamanca where he was mortally wounded, dying two days later.