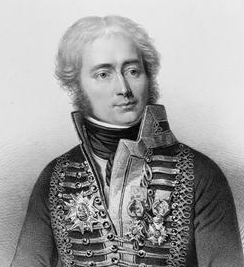 Général de division of artillery who fought at Hohenlinden, Austerlitz, Jena, and Borodino

Foucher de Careil began his military career by enrolling at the artillery school of Metz in September of 1781, and three years later he was commissioned as a lieutenant in the regiment of artillery at Toul. With the advent of the Revolution, he was promoted to captain in 1791 and stationed at Strasbourg before taking command of the 3rd Company of Horse Artillery and joining the Army of the Rhine. He saw action during the retreat from Frankfurt and the defense of Mainz before being promoted to chef de bataillon and then serving in the Vendée.

By 1799 Foucher de Careil was given command of the artillery of the advance guard of the left wing of the Army of the Danube and Switzerland. That year he fought at Liptngen, Zurich, and Winterthur. The next year he served with the Army of the Rhine, and distinguished himself at Hohenlinden. During the peaceful years that followed, he served in garrison at Rennes and Auxonne, and received a promotion to général de brigade.

After a stint commanding the artillery school at Metz, General Foucher de Careil was named deputy commander of the artillery at the camp of Saint-Omer. When war broke out, he was given command of all the artillery of V Corps under Marshal Lannes, a position he held throughout the campaigns of 1805-1807. He took part in the fighting at Ulm, and was wounded by a piece of shell to the thigh at Gunthersdorff in November of 1805. That December he fought at Austerlitz.

In 1806, Foucher de Careil was briefly named Inspector of Artillery, but he continued his combat duties by fighting at Jena and Pultusk . In March of 1807 he received a promotion to général de division, and then in 1808 was named a Baron of the Empire.

For the campaign against Russia in 1812, Foucher de Careil became commander of artillery of his corps which was now renamed to III Corps commanded by Marshal Ney. In this capacity he fought at Borodino and survived the retreat. In 1813 he took command of the artillery of Marshal Marmont's VI Corps and served in Saxony. Late that year he was rewarded as a Grand Officer of the Legion of Honor.

In February of 1814, Foucher de Careil was employed in Macdonald's XI Corps. After Napoleon's abdication, the king sent Foucher de Careil to direct handing over the city of Hamburg to the allies. Once his mission was complete, he returned to France and was well treated by the Bourbons.