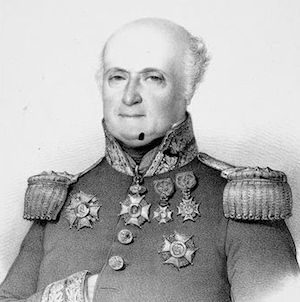 Infantry officer who served on many campaigns

Arc de Triomphe: JAMIN, J. B. on the north pillar

In 1801 Jamin began serving in garrison at Montmédy and in 1803 he was named major of the 12th Light. His next major assignment came in September of 1806 when he joined the 1st Grenadiers of General Oudinot's division. With this unit Jamin fought at Jena in October and then in February of 1807 he was wounded by a sabre blow to the right foot when he was making a reconnaissance near Ostrolenka. A week later he served at the Battle of Ostrolenka and later that year he served at the Siege of Danzig and the Battle of Friedland. In recognition of his service Jamin was promoted to colonel and in November he took command of the 24th of the Line.

In 1808 Jamin was sent to Spain to serve with I Corps and he served at Reynosa and Somosierra . In January of 1809 he served at Uclès and then in July he served at Talavera . Jamin went on to serve at the Siege of Cadiz and in March of 1811 he had his right shoulder shattered by a shot at Chiclana. A month later Jamin was named a Baron of the Empire and he next took command of the arrondissement of Ronda. In 1812 he was recalled to France and during his return trip he helped defend a convoy near Pancorbo.

Jamin was appointed major of the 1st Voltigeurs of the Imperial Guard in January of 1813. He served on the campaign in Saxony that year and in April he was promoted to général de brigade. With his new rank Jamin joined Bonet's 21st Division of Marshal Marmont's VI Corps and in May he was wounded in the left thigh at the Battle of Lützen by the blast of a shell. Later that month he served at the Battle of Bautzen and Wurschen. In July Jamin began serving unde Lagrange and In October he served at the Battle of Leipzig . During the defense of France of 1814 he commanded soldiers in the Young Guard and at the end of January he served at Brienne. In February Jamin served at La Rothière and then in March he fought at Fère-Champenoise where he was wounded by a sabre blow to the head and taken prisoner.

Jamin returned to France in May of 1814 and later that year he was named a Knight of Saint Louis and put on non-activity. After Napoleon returned from exile to resume power for the Hundred Days, Jamin returned to activity. For the campaign in Belgium that June he was given command of the 2nd Brigade of Foy's 8th Division in Reille's II Corps. He served at the Battle of Quatre Bras and the Battle of Waterloo and afterwards he was put on non-activity again, but he resumed his military career in 1816. During the 1830s and 1840s he served as a deputy of Meuse representing Montmédy.