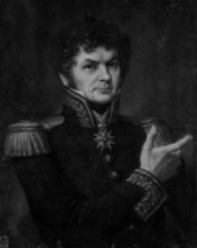 Officer who distinguished himself serving with the Imperial Guard

During the peace that followed, Boyer served in garrison in France. In 1803 he joined the Army of the Coasts of the Ocean and then in 1805 he joined the Imperial Guard as a chef de bataillon in the Chasseurs à Pied. Boyer took part in the campaign against the Third Coalition that year and then in 1806 he was appointed major in the Velites of the Guard. He served at the Battle of Jena in October and later he was assigned to General Teulié's division. In February of 1807 Boyer took the fort of Neugarten and then in March he was appointed major-colonel of the Fusiliers-Chasseurs of the Imperial Guard. His next major action came in June when he served at the Battle of Friedland.

In 1808 Boyer was appointed colonel-major of the 2nd Chasseurs à Pied of the Imperial Guard and he served in Spain. In 1809 he became Baron of Rébéval and he served in the Army of Germany. That June Boyer de Rébéval was promoted to général de brigade and he took command of the 2nd Brigade of Gudin's division in Marshal Davout's III Corps. He led his men into action at the Battle of Wagram in July and then in September he was named a Commander of the Legion of Honor. At the end of 1811 Boyer de Rébéval returned to the Imperial Guard and in 1812 he was named commander of the Chasseurs à Pied of the Old Guard in Curial's division. He took part in the campaign against Russia and he fought at the Battle of Borodino where he was wounded by a shot to the right wrist.

After Napoleon's abdication and the Bourbon Restoration, Boyer de Rébéval was named commander of the département of Aube. During the Hundred Days of 1815 when Napoleon resumed power, Boyer de Rébéval was initially given command of an infantry division at Poitiers. He later served in the Army of the Loire and then in October he was put on non-activity.