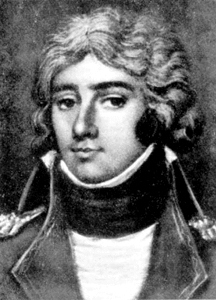 A volunteer during the Revolution, Jean-Isidore Harispe first joined the military in March of 1793 when he was elected capitaine of a free company organized at Saint-Jean-Pied-de-Port. Two months later he was already serving in action, fighting at Val Carlos. That June Harispe fought at Baigorry and then in October he served at the camp of Ispeguy where he wounded by a shot to the left leg. In January of 1794 Harispe was promoted to chef de bataillon and he took command of the 2nd Battalion of Basque Chasseurs. Next he went on to seize the pass of Berdaritz and its redoubts. Harispe continued his active fighting throughout 1794, winning at Arola in April and then seizing Aldudes in June where he was promoted to chef de brigade on the battlefield. He next went on to serve at Fontarabie and Lecumberry. After all that action, at the end of 1795 Harispe was employed in the 11th military division and served in the garrison at Bordeaux. Four years later In 1799 Harispe served in an active command again, this time repulsing the insurgents of Haute-Garonne. The next year he served in the Army of the Reserve and then in 1801 he joined the Army of Italy. In 1802 Harispe was promoted to colonel of the 16th Light.

In 1803 Harispe's unit was placed in Marshal Augereau's corps for training. When in 1805 the Grande Armée moved east, he and his men served in Desjardin's division. The next year Harispse took part in the campaign against Prussia, serving at Jena where his leg was wounded by a ball. In January of 1807 Harispe was promoted to général de brigade and transferred to Marshal Soult's IV Corps. Four months later in May of 1807 Harispe took command of the 2nd Brigade of Verdier's 2nd Division in the Reserve Corps, and in June he fought at Guttstadt and Heilsberg before fighting at the Battle of Friedland where he was wounded by grapeshot.

In 1808 General Harispe was sent to Spain where he would serve for the next six years. Initially he took a position as chief of staff of III Corps and in the meantime he was rewarded as a Baron of the Empire. Harispe fought at the Battle of Tudela and then took part in the Siege of Saragossa. In April of 1809 he began serving under General Suchet and a month later he fought at the combat of Alcanitz where he his left foot was wounded by a ball. 1810 was another busy year for Harispe as he served at the combat on the bridge of Alventosa and then took part in the sieges of Lérida and Tortosa. That year he was also promoted to général de division and the next year he was named a Knight of the Iron Crown.

In 1811 Harispe served under Marshal Macdonald and seized Manresa, and then he won a victory at the pass of Avi. He next took part in the assault on Tarragona but he was again wounded, this time by an explosion. That October Harispe fought at Puebla de Benaguasil and Sagonte, and then in December he took part in the Siege of Valencia. In 1813 Harispe was named a Count of the Empire and awarded the Grand Cross of the Order of the Reunion in 1813. That year he also defeated O'Donnell at Yecla, served at Villena, relieved Tarragona, and fought at the Ordal pass. At the end of the year he took command of the 8th Division of the Army of the Pyrenees, and he then chased Mina to the chateau of Echaux. In February of 1814 Harispe took command of the left wing of the army and he served under Marshal Soult at the Battle of Orthez . The next month he fought at Tarbes and then in April he took part in the Battle of Toulouse where he was wounded in the foot and taken prisoner. Besides being taken prisoner, he lost his foot to that wound.

After hostilities ended with news of Napoleon's abdication, Harispe was named a Knight of Saint Louis by the restored Bourbons and given command of various military divisions. Nevertheless, he rallied to Napoleon upon Napoleon's return in 1815 from exile on Elba. During the Hundred Days, Harispe commanded the 26th Infantry Division in the Corps of Observation of the Pyrenees under General Clauzel. He defended the frontier during that time but then was put on non-activity after Napoleon's second abdication, and he retired to the chateau of Lacarre.

In 1830 General Harispe resumed an active career when Louis-Philippe came to power. In 1831 he was elected deputy of Mauléon and in 1835 he became a Peer of France. More honors followed, for in 1851 he was made a Marshal of France by Louis-Napoleon, and the following year he became a senator.