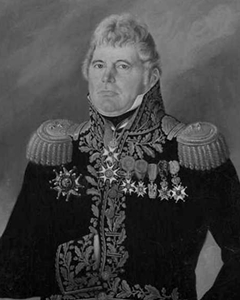 Officer who distinguished himself in Egypt, at the Battle of Austerlitz, and at the Siege of Danzig

Enlisting in the Swiss regiment of Diesbach in 1777, Jean Adam Schramm rose through the enlisted ranks to sergeant in 1784 and then sergeant major in 1786. After the onset of the French Revolution, in August of 1792 he was named a capitaine in the 1st Battalion of French Chasseurs of the North. Schramm served with the Army of the North and in November he was wounded by three sabre blows and a shot to the right shoulder. Afterwards he went on to serve at the action of Mons, the combat of Montagne de Fer, and the action of Liége. In March of 1793 Schramm was wounded in the left leg in combat. In 1794 he joined the Army of the Sambre and Meuse and in June of 1795 he was serving at the Siege of Luxembourg when he was wounded in the left leg again, this time by the blast of a shell. Three months later Schramm served at the crossing of the Rhine at Dusseldorf and then the combat on the Lahn. June of 1796 saw Schramm serving along the two rivers again, first at the second crossing of the Rhine and then again along the Lahn. In 1797 Schramm was sent to the Army of Italy with Bernadotte and he distinguished himself at Tarvis in March. The next month he was promoted to chef de bataillon in the 2nd Light. In 1798 Schramm served in Switzerland before joining the Army of the Orient for the expedition to Egypt. During the campaign in Syria in 1799, he served in Kléber's division and in April he fought at the Battle of Mount Tabor . That November Schramm fought at the Battle of Damietta under Verdier and Kléber promoted him to chef de brigade of the 2nd Light on the battlefield after the commander of the 2nd Light, Denoyer, was killed.

After returning from the expedition to Egypt, Schramm served in garrison at Geneva from 1802 to 1803. In 1803 he took command of the 3rd Grenadiers of the Reserve and when the army marched out in 1805 he and his men served in General Oudinot's division. Schramm distinguished himself at the Battle of Austerlitz and on Christmas Eve he received a promotion to général de brigade. In September of 1806 he joined Dupas' division and VIII Corps. That December he served at Magdeburg under Eblé and then in January of 1807 he joined Marshal Lefebvre's X corps. In this position Schramm served at the Siege of Danzig where he seized the Vistula Spit in March and in May he distinguished himself near Weichselmünde by stopping Russian reinforcements from disembarking. After the successful conclusion of the siege, he took command of the 3rd Brigade of Verdier's 2nd Division in Marshal Lannes' Reserve Corps. Later that year rewards followed for Schramm was named a Knight of the Order of Military Merit of Wurtemberg, a Knight of the Order of Saint Henry of Saxony, and a Knight of the Iron Crown.

In 1808 Schramm was sent to Spain and he took command of a brigade in Rouyer's division as part of Dupont's corps. He served at Alcolea in June and then in July he fought at the Battle of Bailen where he was wounded by a ball to this chin. Schramm refused to surrender and he was taken prisoner. Afterwards he was returned to France by the British navy along with other senior officers. Despite being present at the disaster at Bailen, Schramm was sent back to Spain and named a Baron of the Empire.

In 1809 Schramm was employed in Germany and he joined Tharreau's division. After the Austrians began the War of the Fifth Coalition, he fought at Ratisbon in April where he was wounded by two shots, one to the chest and another to the right thigh. At the end of the year Schramm took command of the département of Bas-Rhin. During the campaign against Russia in 1812, he commanded a brigade of the 34th Division in Swedish Pomerania. Schramm returned to France in April of 1813 and then in June he retook command of the département of Bas-Rhin. The next month he was named a Commander of the Military Order of Maximilian Joseph of Bavaria. For the defense of France of 1814 Schramm commanded the National Guard of Strasbourg.

After Napoleon's abdication and the Bourbon Restoration, Schramm was named a Knight of Saint Louis and placed in charge of the département of Haute-Marne. He retired in March of 1815 and during the Hundred Days he returned to the army to command the département of Bas-Rhin and the National Guard of Strasbourg again. Afterwards, Schramm again retired.