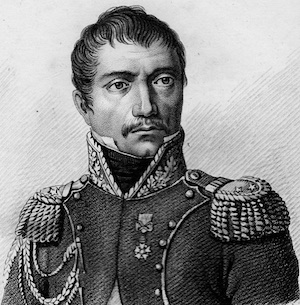 The son of the prominent French politician and lawyer known as Merlin de Douai, Antoine François Eugené Merlin joined the army as a sous-lieutenant in the 7th Chasseurs à Cheval in October of 1795. Serving with the Army of the North, it wasn't long before he became an aide-de-camp to General Songis. In May of 1798 Merlin became an aide-de-camp to General Bonaparte and therefore he joined the expedition to Egypt. He served at the Battle of the Pyramids and then in 1799 he took part in the action of Katieh where Bonaparte promoted him to lieutenant. Following his commander to Syria, he served at the sieges of Jaffa and Acre before returning to Egypt where he served at the Battle of Abukir. When Napoleon decided to leave Egypt and return to France, Merlin was one of the officers selected to accompany him back to France. Back in France, in March of 1800 Merlin was promoted to capitaine and in April he became an aide-de-camp to General Dupont. In June he served at the Battle of Marengo.

In 1801 Merlin was promoted to chef d'escadrons and in 1803 he was placed with the 4th Hussars. He served in Hanover from 1803 to 1805 and then in 1805 he joined the Grande Armée for the campaign against the Third Coalition. During that campaign, Merlin fought at the Battle of Austerlitz. In August of 1806 he married the daughter of the French politician Louis Jérôme Gohier. When Prussia declared war on France in October, Merlin took part in the campaign and he fought at the Battle of Jena and the action of Lubeck. In February of 1807 he was appointed major and then in June he served at the Battle of Friedland.

In 1808 Merlin was named a Knight of the Empire and in 1809 he served under Marshal Bernadotte at Antwerp. In 1810 he was sent to the Spanish Peninsula and in September he was promoted to colonel of the 1st Hussars. In 1811 Merlin served in Soult's brigade at the combat of Sabugal and in 1812 he served at the Battle of Salamanca. Later that year he joined Curto's brigade in the Army of Portugal and then in 1813 he was called to fight in Saxony. Merlin was promoted to général de brigade in July and in August he took command of the 2nd Brigade of Lorge's 5th Light Cavalry Division in Arrighi's III Corps of the Cavalry Reserve. He went on to serve at the Battle of Leipzig and then the Battle of Hanau. In December Merlin was assigned to the defense of Mainz which he helped hold until April of 1814 after Napoleon's abdication.

The restored Bourbons named Merlin a Knight of Saint Louis but also put him on non-activity. When news of Napoleon's landing on French soil reached Merlin, he seized the fort of Vincennes in Napoleon's name before Napoleon had resumed power. Napoleon initially placed Merlin with III Corps but then in June Merlin was given command of the 2nd Brigade of the Subervie's 5th Cavalry Division in the Army of the North. After the loss of the Battle of Waterloo, Merlin fell back with the army and his unit became part of the Army of the Loire. Merlin and his father were proscribed by the restored Bourbons and they fled France. (Some sources say his father was the one proscribed and his father was a regicide having voted for the execution of Louis XVI, but Merlin had also joined Napoleon's cause before Napoleon resumed power, so either could be proscribed). During his time away from France, Merlin was aboard the American ship Alice when it sank at the mouth of the Schledt in February of 1816, but he survived. Merlin was allowed to return to France in 1818. In 1820 he was accused of being part of a military conspiracy at Belfort but he was acquitted at trial.