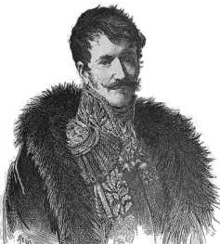 The oldest of three brothers who would rise to become cavalry commanders, Edouard Colbert began his military career by volunteering in 1793 in the 7th Battalion of Paris, known as the Battalion of William Tell. After serving on the Rhine and then in the Vendée, he was promoted to sous-lieutenant in the 11th Hussars in 1795. In January of 1796 General Hoche suspended Colbert for being a royalist and his career came to a stop for a few years.

In 1798 Colbert was reintegrated into the army and assigned to the Army of the Orient. During his time with the expedition to Egypt he was wounded by a shot to the arm, promoted to capitaine in the 3rd Dragoons, and he became an aide-de-camp to General Damas. Once back in France, Colbert joined the Mamelukes of the Consular Guard, and then in 1803 he became an aide-de-camp to General Junot.

When the campaign against the Third Coalition began in 1805, Colbert became an aide-de-camp to Marshal Berthier. He served throughout the campaign that year and served at the Battle of Austerlitz where he was wounded by a shot to the thigh. The next year Colbert was promoted to chef d'escadrons and placed with the 15th Chasseurs à Cheval. At the end of 1806 he received another promotion, this time to colonel of the 7th Hussars. Before long Colbert led his men into battle at Eylau. Continuing to serve in the army during the campaign in June of 1807, he served at the Battle of Heilsberg and the Battle of Friedland.

In March of 1809 Colbert was promoted to général de brigade and given command of the light cavalry brigade of II Corps. He participated in the Danube campaign against Austria that year. That May Colbert fought at Amstetten and then was made a Baron of the Empire at the end of the month. In July he fought at the Battle of Wagram where he was wounded again wounded, this time by a shot to the head.

Colbert continued to command a brigade for the next few years until March of 1811 when he was named Colonel of the 2nd Lancers of the Imperial Guard, also known as the Red Lancers of the Guard. He led them into and out of Russia in 1812 and then during the campaigns in Germany of 1813, distinguishing himself at Battle of Bautzen. In October of 1813 Colbert took command of a brigade of dragoons, and then in November he was promoted to général de division.

With France threatened in 1814, Colbert returned to the Red Lancers to lead them in Champagne. In February they fought at La Rothière, Champaubert , Montmirail , Château-Thierry, and Nangis, and then in March they fought at Craonne, Reims, Epernay, and Arcis-sur-Aube. After Napoleon's abdication in April, the restored Bourbons left Colbert in command of the remnants of the regiment but renamed it.

When Napoleon escaped from exile on Elba for the Hundred Days, Colbert did not initially rejoin him, instead waiting until the king had fled and Napoleon had taken the throne in Paris. When Colbert finally brought the regiment to Paris, he went ahead of the regiment and went to an inspection of troops already in progress. Napoleon noticed him and remarked, "Ahah, there you are, General Colbert! You are arriving quite late!" Colbert attempted to placate Napoleon, "Sire, I could come no sooner." But Napoleon was annoyed. "Come! You're late! What kept you?" Colbert responded, "Sire, not as late as you, I have been waiting for you for a year."1

Napoleon kept Colbert in charge of the Lancers of the Imperial Guard for the campaign in Belgium of 1815. Colbert fought at Quatre Bras where he was wounded by a shot to the left arm, and then at the Battle of Waterloo he continued to lead his lancers despite having his arm in a sling. When the Bourbons returned once again after Napoleon's second abdications, they were not happy with Colbert's statement to Napoleon and threw him in prison until 1816. Once released, Colbert's career came to an end until 1826 when he was reinstated. In 1835 he was wounded by the device that attempted to assassinate King Louis Philippe and did kill Marshal Mortier.